In early 2022 the major political parties began campaigning for the Federal election to be held by May.

In response, a number of these billboards came under attack in Sydney by quite dedicated unknown graffitists in a concerted campaign to "reface" them and challenge the "unhealthy pormotion" that they presented. Some samples are included below.

However, this was not the first time political billboards were targeted by unknown "refacers" - this one is from the Liberal political campaign for Peter Dutton in 2016. 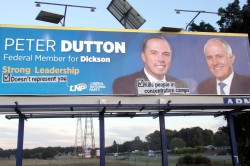