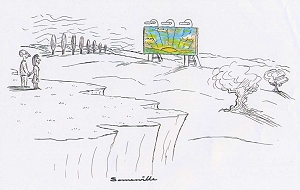 In the 1970s in Australia, tobacco and other advertising was everywhere - indoor, outdoor, in cinemas and on television. Tobacco was also the most advertised product in the world, except for perhaps all food counted together. Food stores were identified by their complete coverage by tobacco ads.

Huge tobacco advertisements covered the sides of buildings, or blared from their rooftops. Freeways and roads had tobacco signs along the way. Billboards were at railway stations and between stops, in train carriages and on buses. The medical profession wrote submissions to have them removed, in vain. The visual environment had become dominated by advertising and the few regulations that existed were ineffective. Someone had to do something about it!

Q. When did BUGA-UP start?

BUGA-UP was created in 1979 by 3 people: Bill Snow, Ric Bolzan and Geoff Coleman. They all objected strongly to the hypocrisy of government, the advertising industry and legal drug pushers (tobacco & alcohol) in advertising products that were health hazards. They had been attacking billboards with graffiti and paint bombs for more than a year but felt that a more coordinated campaign was required. The aim was to 'reface' billboards to provide a truer message than the ones that were being promoted.

They decided that to compete against the advertisers, they needed our own branding. This was achieved at one of their 'strategic planning' evenings, when coincidentally it was raining too heavily to go out and hit the billboards. That night they coined the acronym BUGA-UP Billboard Utilising Graffitists Against Unhealthy Promotions. From that date they began signing all billboards with BUGA-UP and what had seemed to be random graffiti took on a whole new dimension. The advertising industry didn't know what hit them!

Q. Why was BUGA-UP formed?

Advertisements are one-way communication, specifically designed to influence us as consumers. Nowhere is this more obvious than with the ugly billboard advertisements which saturate our environment. The products pushed in these ads are often useless or positively harmful to our health. Yet, as individuals, without corporate resources, we have no effective legal right of reply if we object to the products themselves or the way in which they are promoted.

Billboard graffiti begins a process of two-way communication, creating a dialogue where before there was only an instruction or threat that if we didnt live their lifestyle of booze, fags and mass consumption we were somehow inadequate. Take a look at Autumn Catalogue of 1980 with 40 of our 'Earliest Hits for example.

BUGA-UP was one of the earliest examples of culture Jamming in the world, and certainly in Australia. Culture jamming is often seen as a form of subvertising and this was certainly a prime objective of BUGA-UP.

The main idea was to turn advertising back on itself, using the same medium/location as the advertising to subvert the message that was being displayed. It was about reclaiming public space, especially on government property, and increasing community awareness of the shared nature of the visual environment.

Q. How many people are in BUGA-UP?

The movement grew quickly to about half a dozen, and BUGA-UP held its first public meeting in Sydney, in October 1980. Despite the fact that it was poorly advertised (there were very few blank billboards around at the the time) over fifty people attended. They showed slides and discussed their work, and most importantly, recruited new graffitists who put theory into practice. Sometmes evening 'workshops' were held to train new recruits in refacing techniques.

Within a couple of years, branches started in Victoria, South Australia, Western Australia and Queensland. In addition there were many individuals throughout Australia the took up the spray can. Often they were unknown to the state coordinators until they had the misfortune to be arrested. Many of these people are still involved in social activism.

Q. Were many people arrested?

There were over 20 arrests during the 80s, however there were much fewer convictions. Some cases were successfully defended and others dismissed by the courts. Some of the more interesting court cases are covered in the Billbored Newsletters - 1982-1985

Q. How can I find out more about BUGA-UP?

There is a lot of historical information in the Billbored Newsletters - 1982-1985 and other documents in the Publications section. Also the News section contains nearly 100 news items of BUGA-UP activities. For archive purposes we have kept the 2007 FAQ.

Q. How can I attack offensive billboards?

If you feel sufficiently outraged by offensive Billboards in your area, you may find the How To section useful.

This website is provided mainly as a resource for information about BUGA-UP. You can send a message via the Contact form, but the mailbox is only checked weekly, so please be patient if you expect a reply.